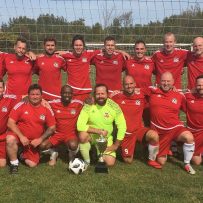 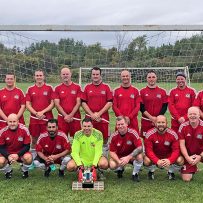 Mexico 2014 was a huge success, everybody had a great time and the soccer was awesome. Checkout the Facebook page for all the pictures from each...

Peterborough Oldtimers Soccer Club was founded in the late 60’s by local soccer players, who were dedicated to the promotion and growth of men’s over 40 competitive soccer in our community. The club changed its name to Peterborough F.C. In 2011, and added an over 45 team to the Club. In 2015, the Club expanded once again this time adding an O-35 Team.

Our mission is to create and to provide for our members the opportunities to play soccer for their enjoyment, and for the improvement of the game in an atmosphere in which our players support and respect each other. We encourage and expect our members and players to respect their opponents, coaches, managers, and officials and to exhibit good sportsmanship and fair play at all times.

Our club is dependent upon the commitment and dedication of our players and volunteers, and we deal with one another with courtesy and mutual respect both on and off the field.

2019 schedules have been posted for each team. Please note there will be some adjustments over the next week, so please check the schedule here before each game. Over 35, Over...

Hi Everybody Mexico 2014 is a go! we have 28 people signed up for the trip with a very strong team of players joining us for the trip, The resort we will be staying at will be Las Hadas in Manzanillio Mexico it is absolutely beautiful, some of the people going have been there before Las Hadas Resort in Mexico, http://www.lasbrisascollection.com/hotels/manzanillo/the_resort     We have scheduled 3 games as follows: Tuesday, April 1st at 11am against the Reporteros Manzanillo Team at the Las Hadas Resort field. Wednesday, April 2nd at 4pm against Manzanillo FC at the Manzanillo field. Sunday, April 6th at 11am against Deportivio Cihuatian at the Barra De Navidad Jal Stadium Looking forward to another great trip to Mexico...

Over 45 Cup Final Game Sorry to say the over 45 team did not win the cup final again this year, we got beat by Oshawa FC 1-0 in a really close match that could have gone either way. We had a great season with only one loss all season and being runners up in a league this competitive is a big achievement so we are all happy with 2013 season for the over...

Hi Everyone, Peterborough FC is planning a soccer  trip to Manzanillio Mexico  March 2014, there will be Three (3) games of soccer played, Peterborough FC has been to Manzanillio 3 times in the past and it is quite an experience. The Trip is open to all players on both the Peterborough F.C. Over 40 and Over 45 teams. For the 7 day (1 Week) trip, there are  two possible weeks in March will be decided upon by the group going.  The two tour companies have flights going as follows. March 21- 28 (Friday –Friday)  West Jet March 28- April 4 (Friday to Friday) March 24-  March 31 ( Monday- Monday) Air Transat  March 31...